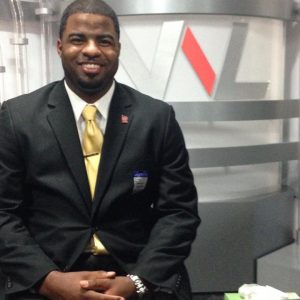 After a thorough search, we have selected Cameron Hill as the new District Director of Athletics. Cameron Hill comes to Valor by way of New Orleans, LA, where he previously held the position of Athletic Director in Plaquemines Parish Public Schools. Cameron received numerous honors while in his previous position including being named 30 under 30 Athletic Directors for transformational leadership and Phillips 66 Educator of the Year for 2018-19. Cameron also previously coached Boys basketball leading them to a school record for wins, parish championship, coached a Mcdonald’s All American nominee and several collegiate basketball players.

Prior to his time in New Orleans, Cameron worked in Bristol, Connecticut as a Content Associate Producer for Sports Television Giant ESPN, Inc. During his time at ESPN, Cameron worked on several EMMY award winning shows including SportsCenter, E60, First Take, Numbers Never Lie and SportsNation. Cameron completed his Bachelor’s Degree from Loyola University where he majored in Mass Communication. At Loyola, Cameron was a member of the Men’s Basketball team where he received several on and off court honors for his athletic career, including NABC Honors Court, Academic All-American, Champions of Character Sportsmanship Award, All-Conference, Academic All-Conference. He then went on to receive his Master of Science Degree in Sports Administration from St. Thomas University in Miami where he graduated Summa Cum Laude.

Cameron is originally from the Southside of Chicago, IL and moves to Metro Nashville with his Fiancèe and young daughter. Cameron’s quote he lives by is “You cannot live a perfect day without doing something for someone who will never be able to repay you.”

I hope that you all will welcome Cameron Hill, and his lovely family, to the Valor community. Please show him some support, as he gets acclimated to the new city and new job. There will be several opportunities to meet Mr. Hill at the upcoming orientation events, but be on the lookout for more communication from him over the coming weeks.